Practical guide to installing infrared underfloor heating in a caravan

You know the problem that it is pleasantly warm inside your caravan, but the floor is comparatively cold? The cause is purely physical, because warm air rises and thus the floor and the feet remain cold. This is exactly where an electric underfloor heating system based on an infrared heating foil can provide a remedy!

By using infrared heating film, the floor can be pleasantly tempered over almost the entire surface and is thus a perfect supplement to the existing heating system. An application as sole heating is not feasible in a caravan due to the ratio of heating surface to room volume. 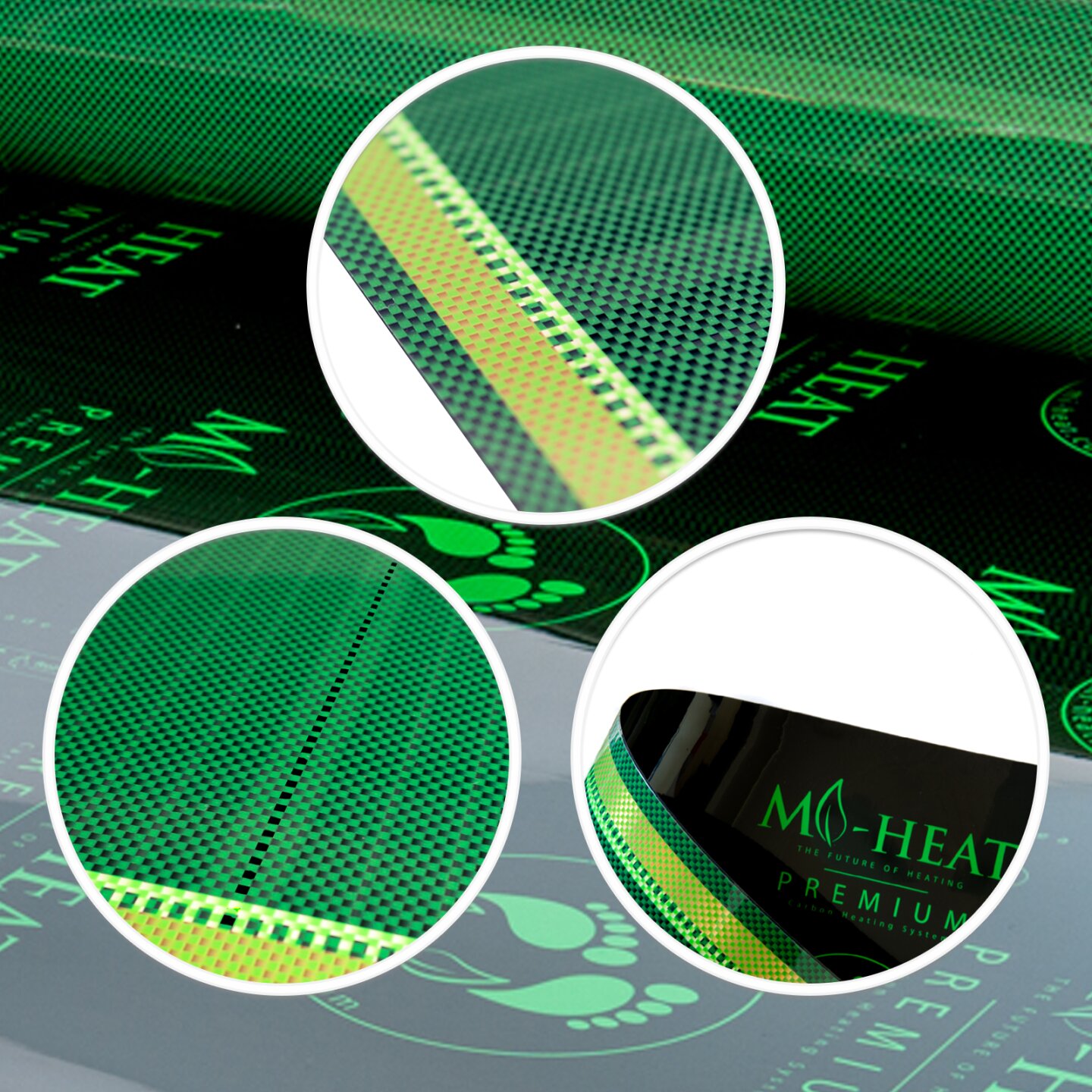 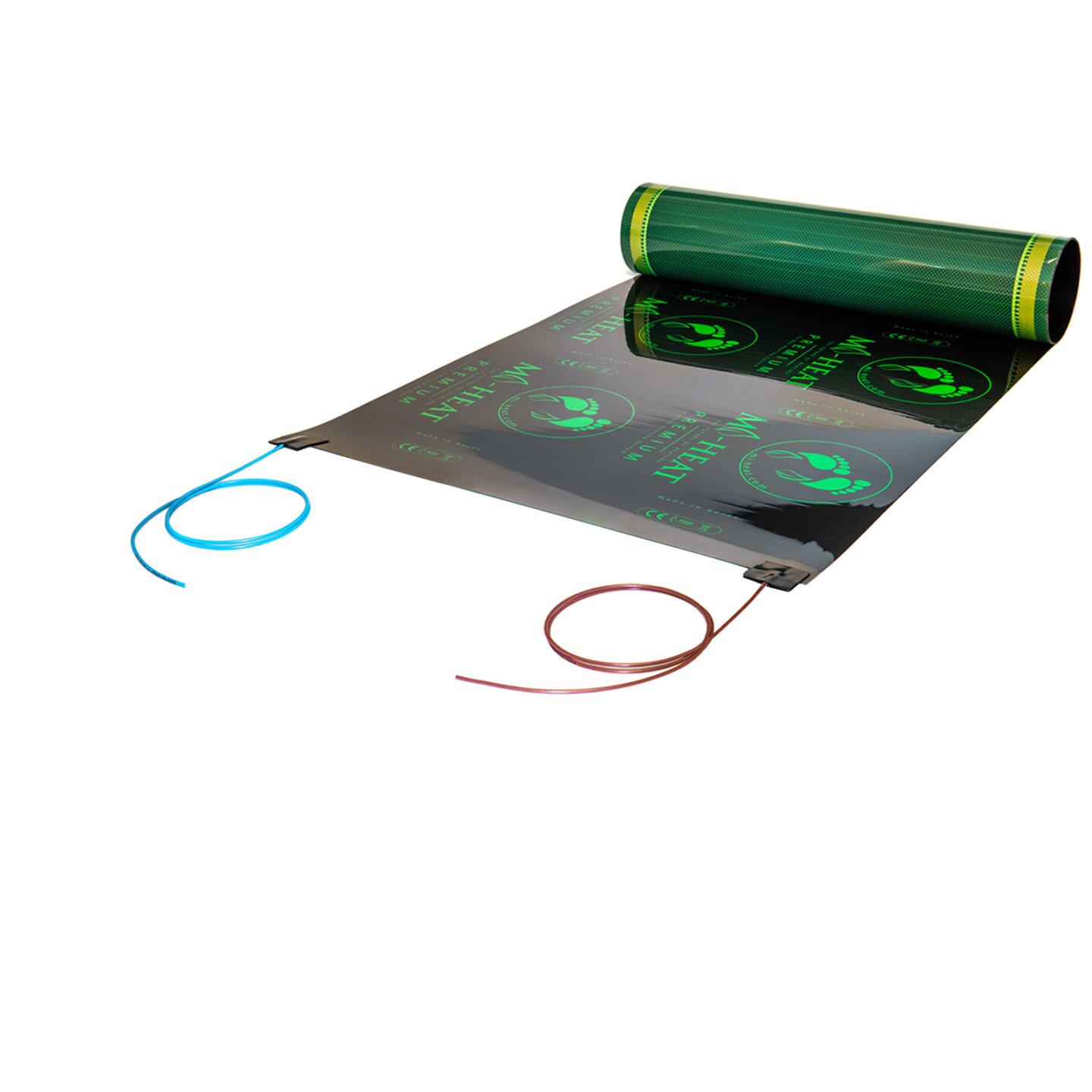 What voltage does the infrared heating foil work with?

The majority of our project enquiries are realised with 230V infrared heating film. This is due on the one hand to the lower purchase price for the film, and on the other hand to the user behaviour of mobile home owners.  It has been shown that the overwhelming majority stay on pitches with shore power.

Heating films with 12V (standard for cars and motorhomes) or 24V (standard for trucks and often for conversions to expedition vehicles) is mostly used for self-sufficient user behaviour, i.e. when no shore power is available. Of course, this results in significantly higher currents, so precise planning is necessary.

If, for example, we assume a total area of 2.0 m² to be heated with a 12V heating film of 130W/m², we arrive at a current consumption of almost 22 amps (formula: current = power : voltage). A frequently used battery type is an AGM battery, which ideally should not be discharged below 50%. If we assume a battery capacity of 150 Ah, the critical point at which the battery should be recharged is reached after about 3.5 hours in extreme cases (continuous heating at low outside temperatures). The charger for the battery must also be designed accordingly so that the extracted power can also be recharged.

What heat output in W/m² is sensible?

We recommend a heating capacity of 130W/m² for tempering the floor. A lower output would not lead to the desired success in the caravan due to the meagre insulation.

If the caravan is also to be used at very low outside temperatures and the batteries and water tanks are to be heated, a 220W/m² heating foil should be used. 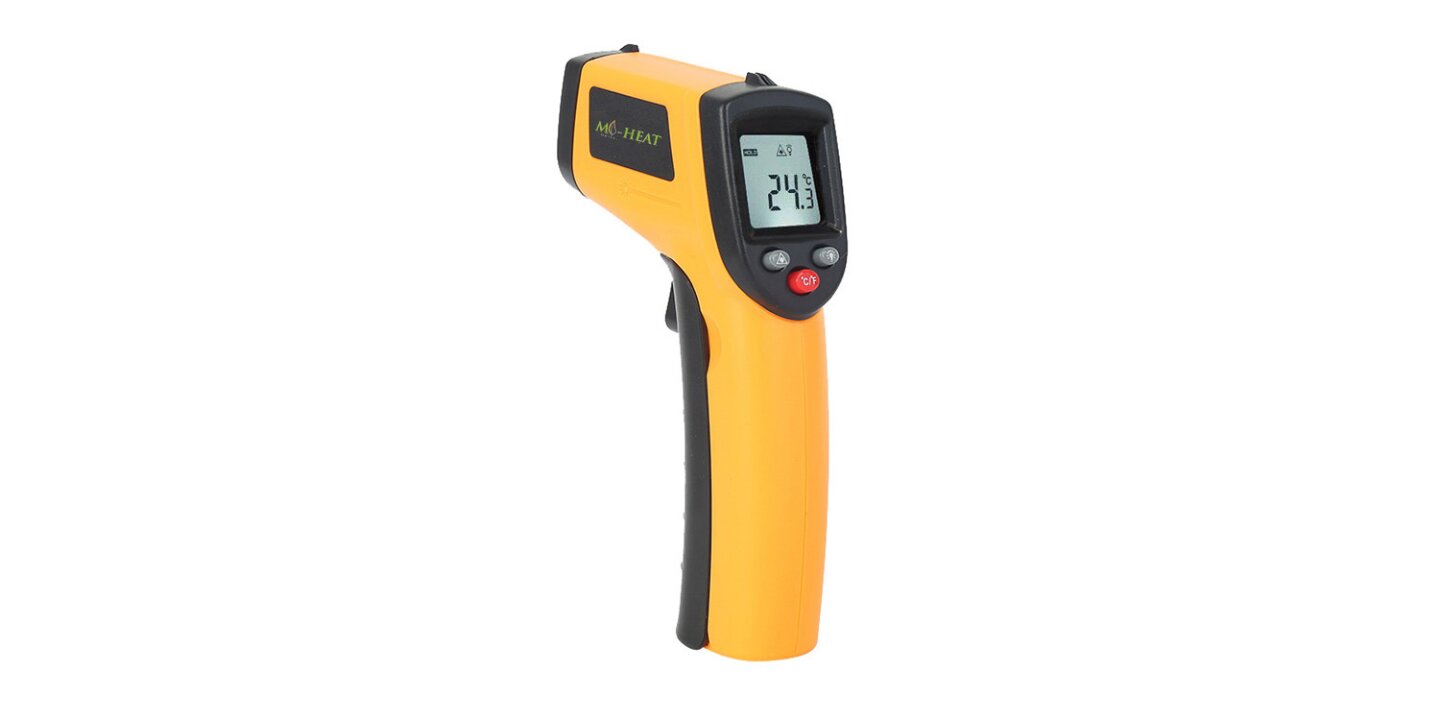 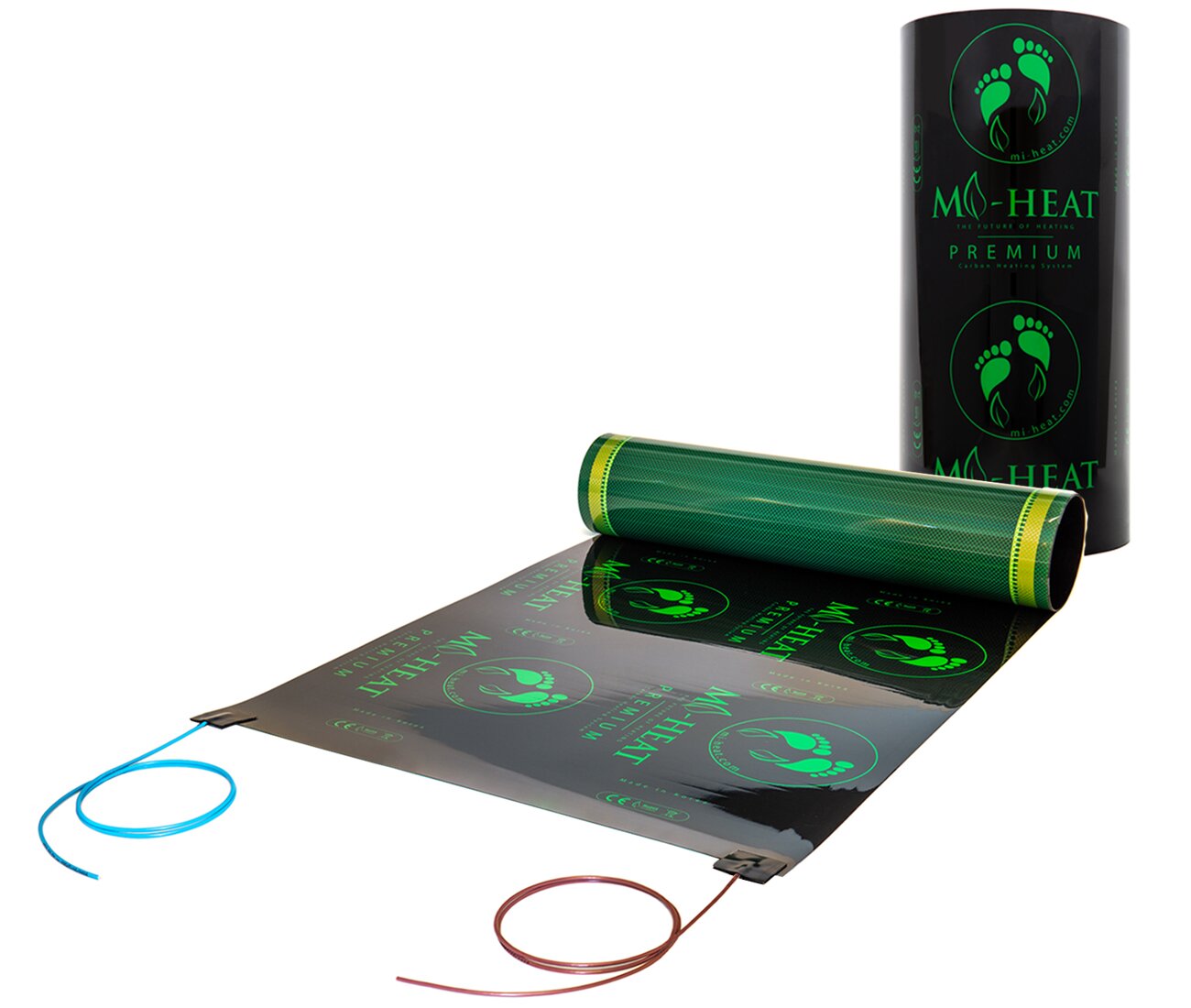 In our online shop, you will find the heating films both as ready-made heating strips and as kits.

The connection cables are 2.5 metres long as standard, but can be customised on request. To do this, simply add the additional amount of cable required (each available as a 5m ring) to the shopping basket and specify the desired distribution in the comments field.

Alternatively, the heating film is also available as an inexpensive kit. Here you can freely design the lengths of the individual sheets. Depending on the selected heating film, a separation is possible every 3.5 to 25 cm. So-called connection sets are included, which contain the required number of crimp connectors, double-insulated connection cable and vulcanising tape for insulation.

Do not forget insulation

An often underestimated component when setting up underfloor heating in a motorhome is the insulation by means of a so-called heating film underlay. This is a type of impact sound insulation with a high thermal resistance and a side laminated with aluminium. This is available in thicknesses of 1.5 mm, 3 mm and 5 mm.

A normal impact sound insulation, as known from a water-guided underfloor heating in a house, is not suitable here. This is because it has a very low thermal resistance, as the heat is supposed to pass through the underlay. So it is not really suitable for our application.

In addition, the heating film underlay protects the existing floor covering from possible uneven fading and, depending on the design, can partially or even completely accommodate the connection cables / connection points of the heating film.

Less is more - From the basic idea, one would now think that the thickest possible insulation would be the optimal solution. However, this assumption is not generally correct, because the correct thickness of the heating film underlay goes hand in hand with the chosen floor covering.

A thicker floor covering, such as vinyl on HDF support, laminate or parquet, is very resistant to foot traffic. A heating film underlay up to 5 mm thick can also be laid underneath without any problems. 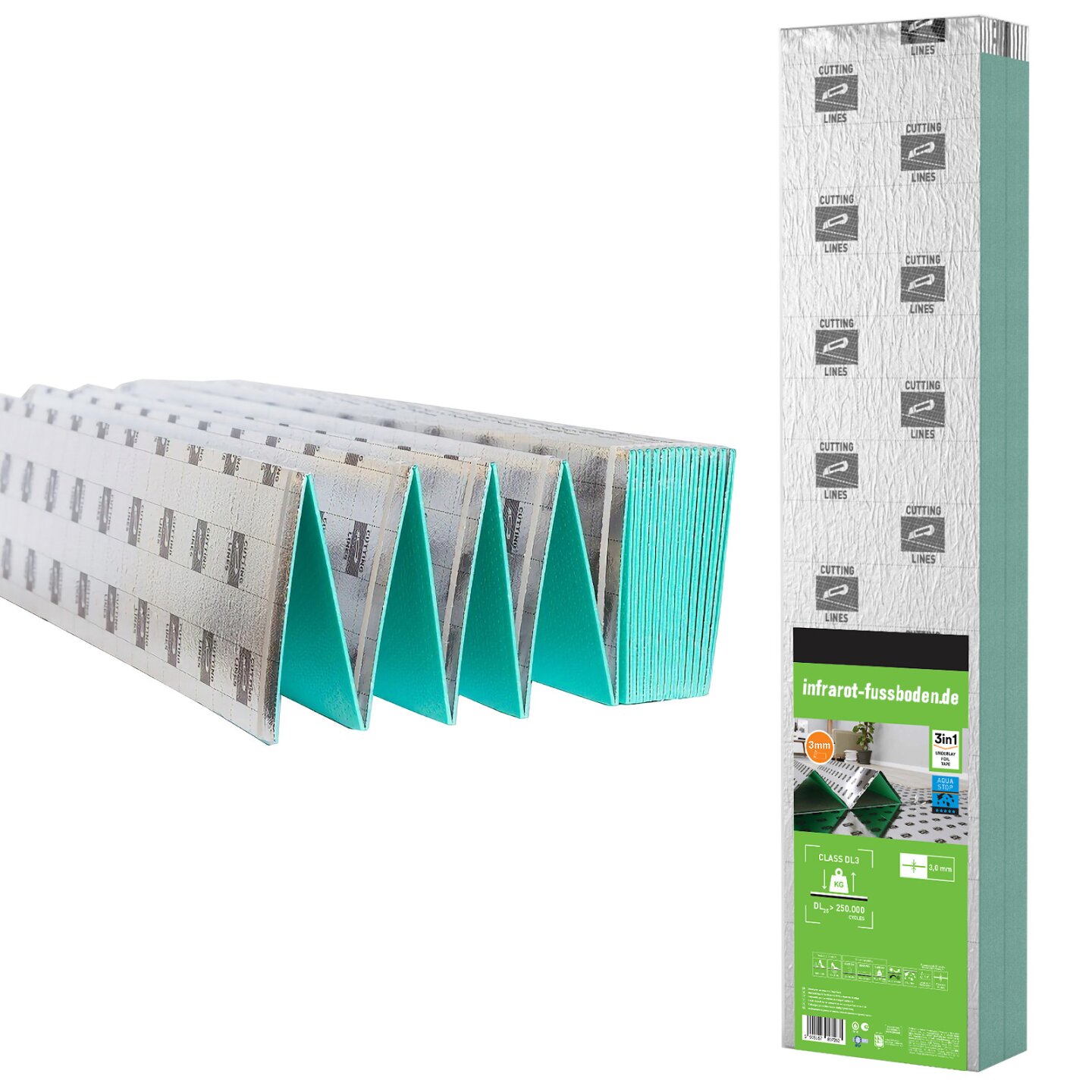 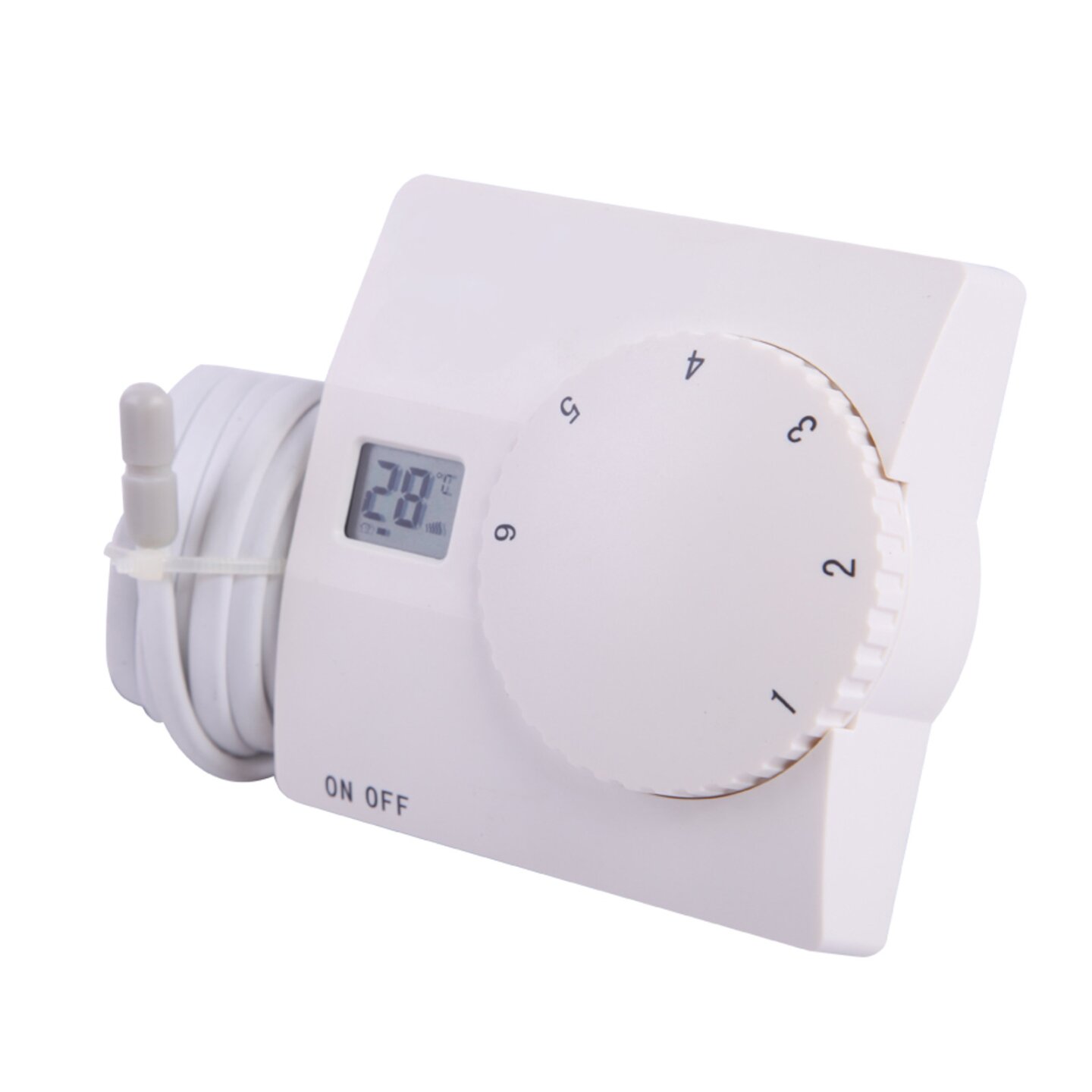 Thermal monitoring by means of thermostats

It is important to note that the heating film may only be operated in conjunction with a suitable thermostat, which ensures thermal monitoring by means of an external floor sensor. This also enables the floor temperature to be limited to the maximum temperature specified by the floor covering manufacturer (usually max. 27° C surface temperature).

The floor sensor of the thermostat should protrude at least 10 cm into the active heating area of the infrared heating film so that the temperature can be measured correctly. In addition, it is advisable to choose a position on the floor where there is as little walking as possible to avoid mechanical damage to the sensor.

The following models are particularly popular with our customers:

Of course, any other thermostat from our range can be used to control the electric underfloor heating. In addition to classic wired thermostats, there are also models with radio transmission and even with WLAN and a suitable smartphone app (WLAN router required).

After choosing the right heating film, a heating film underlay as insulation and a suitable thermostat, the basic components of an electric underfloor heating system for the caravan have been assembled so far. However, there are still a few important accessories that should not be forgotten: 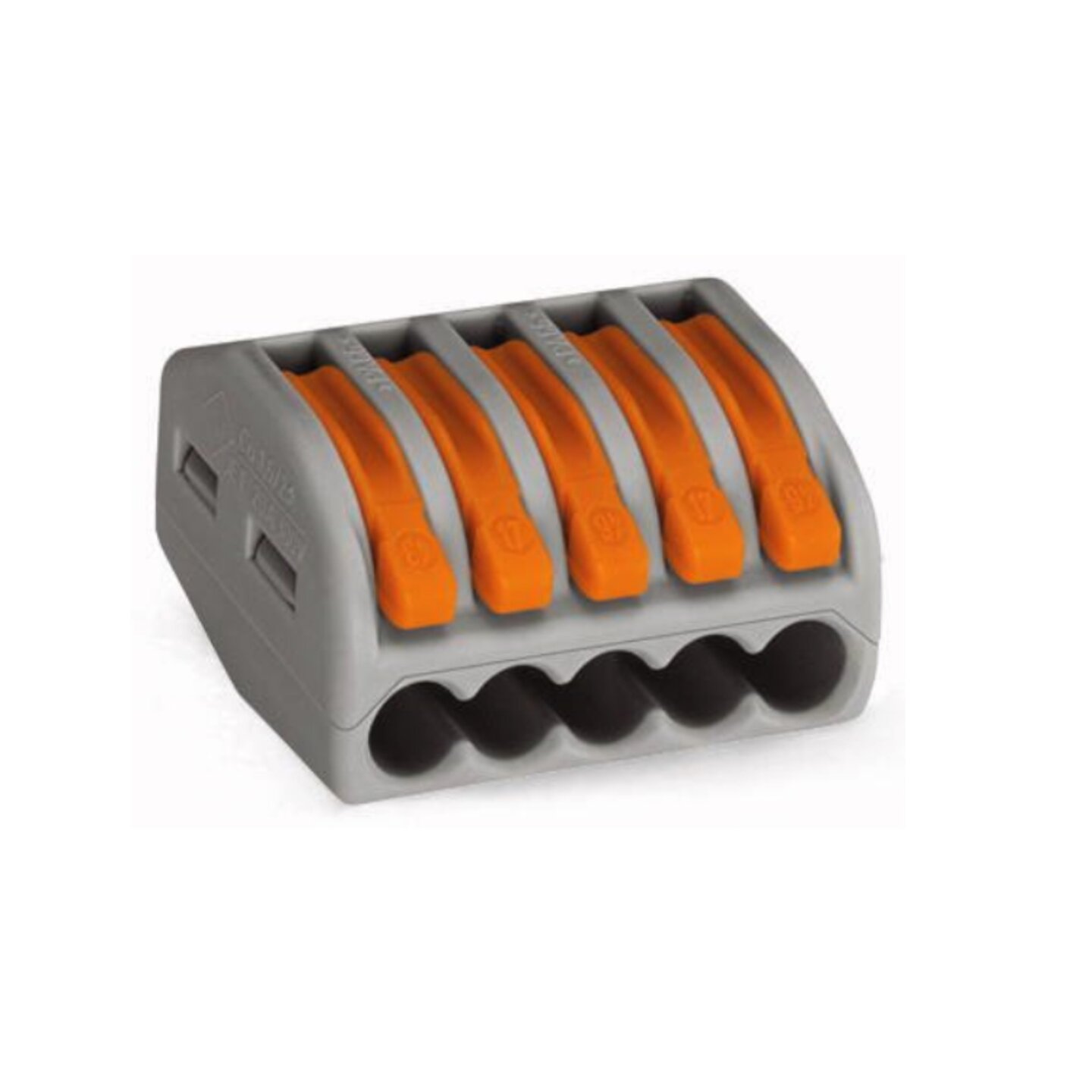 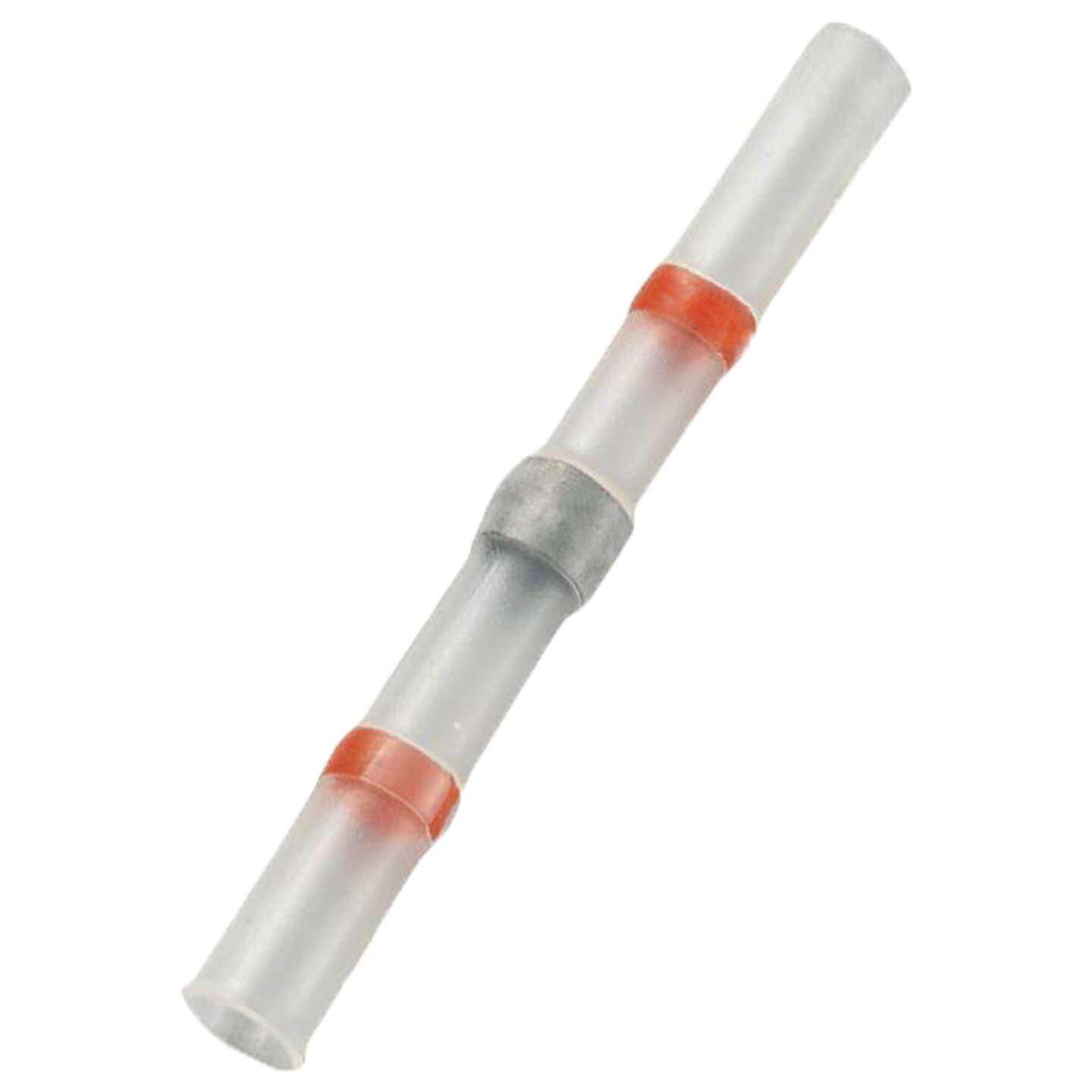 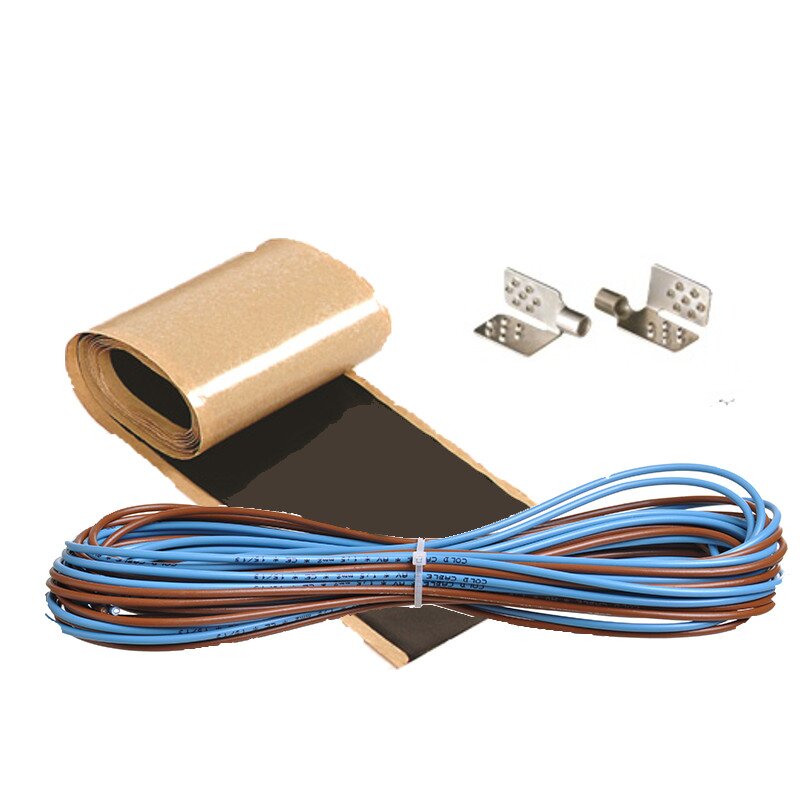 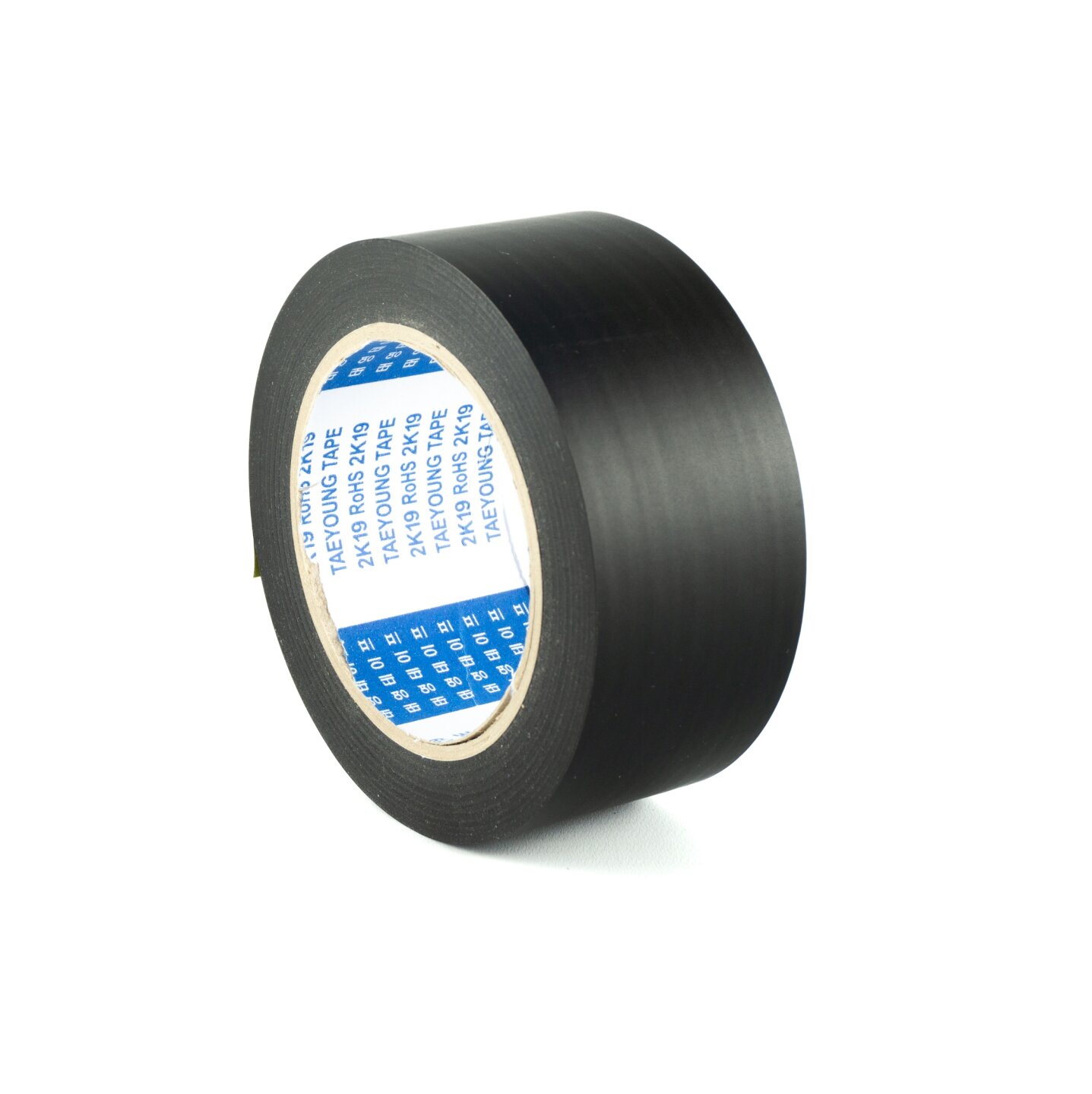 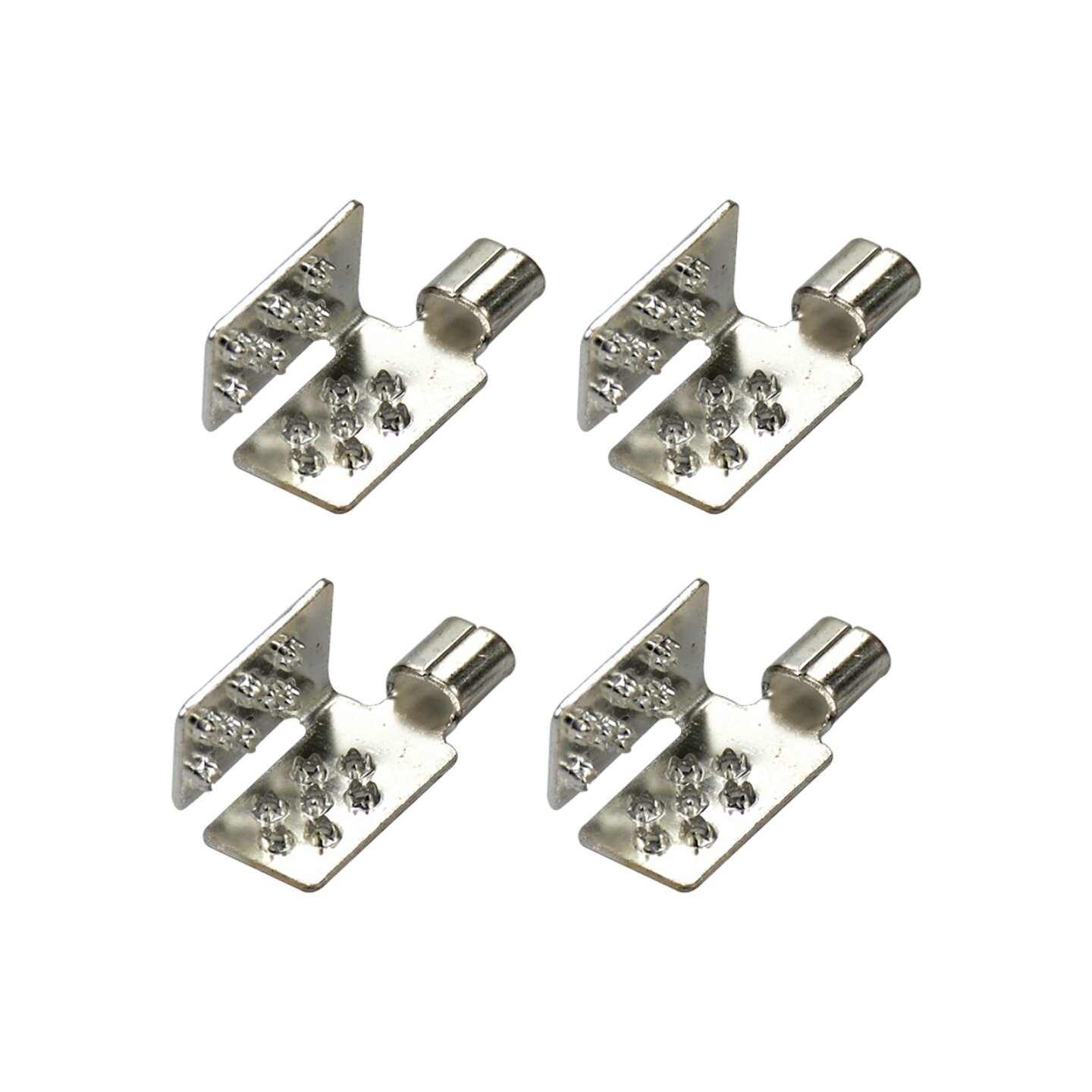 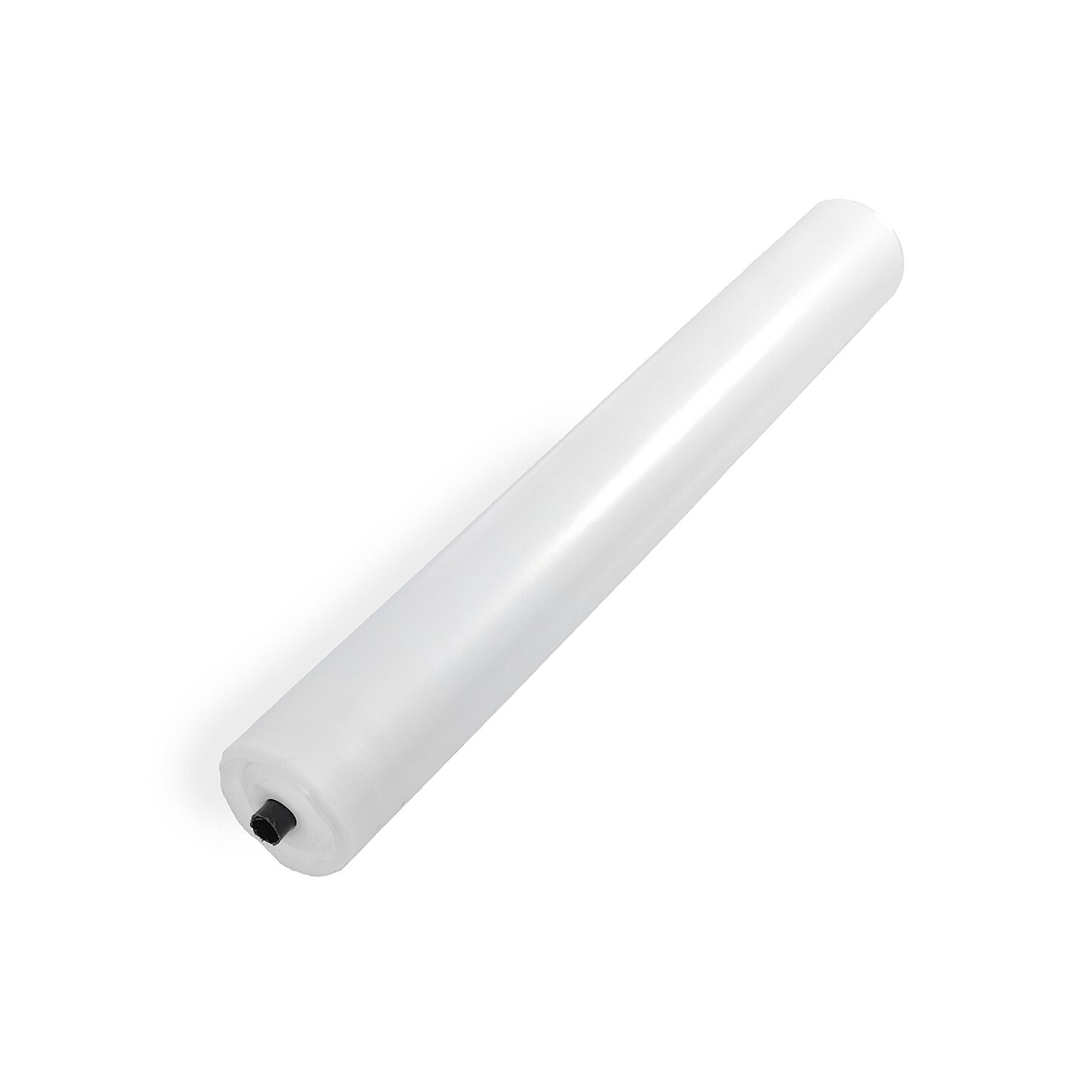 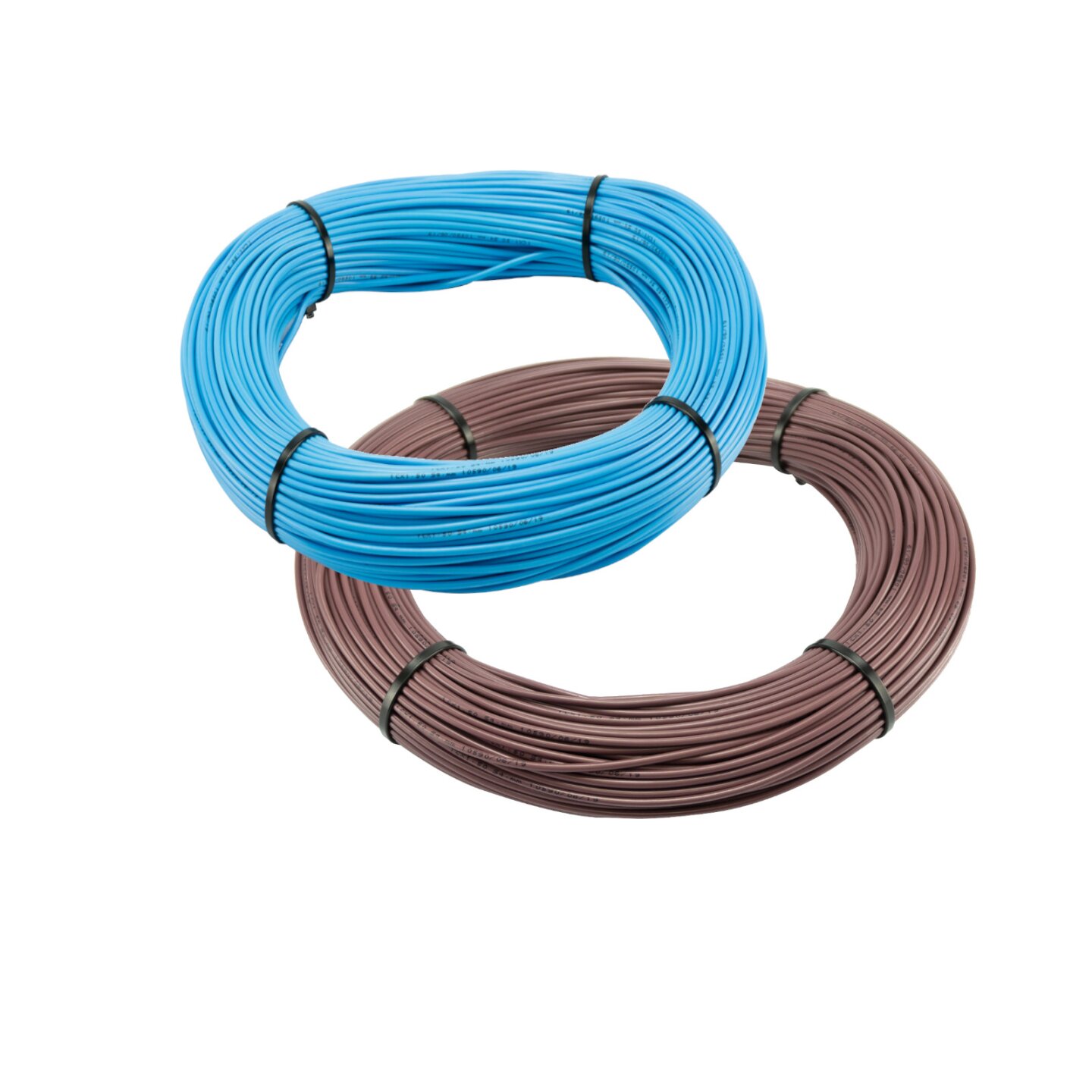 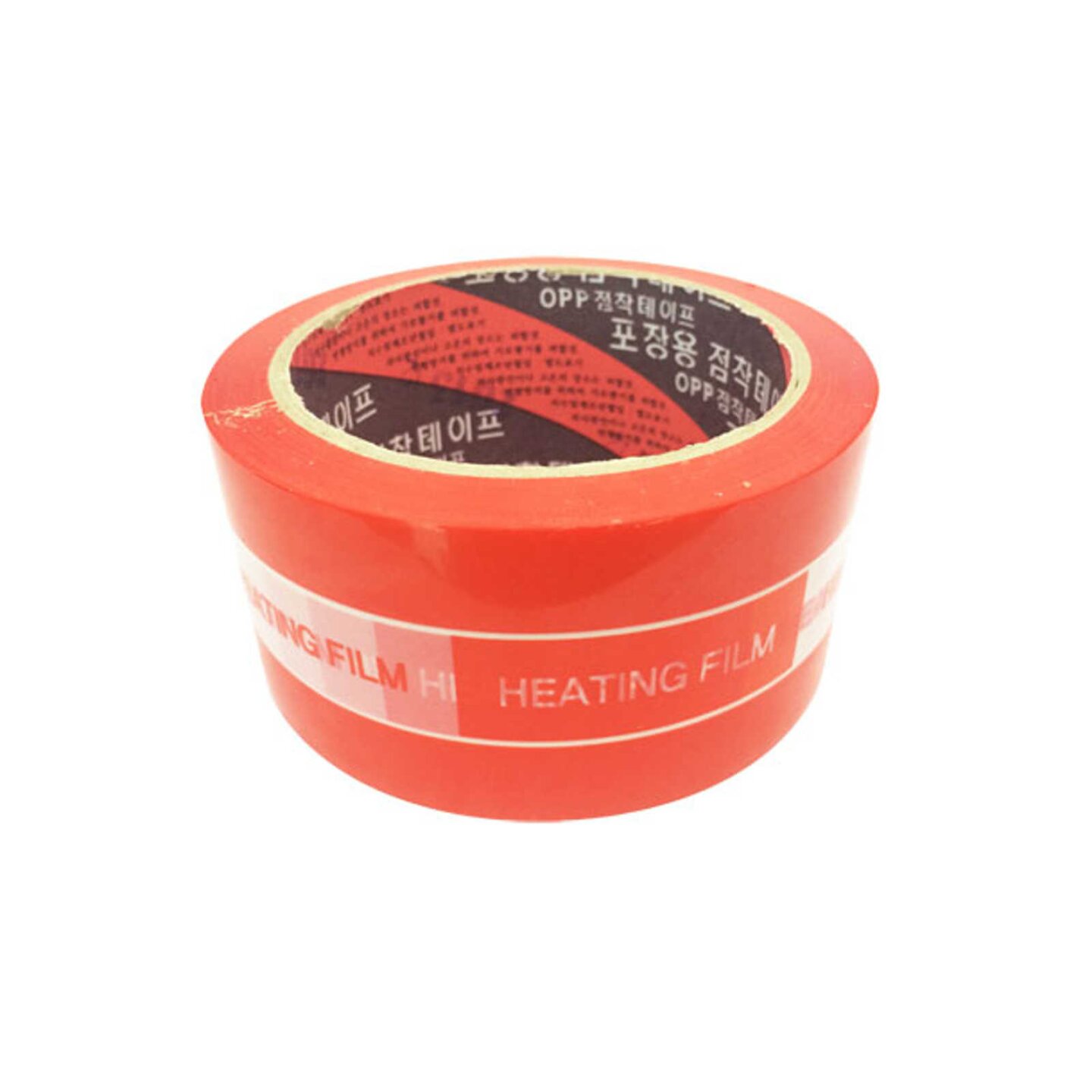 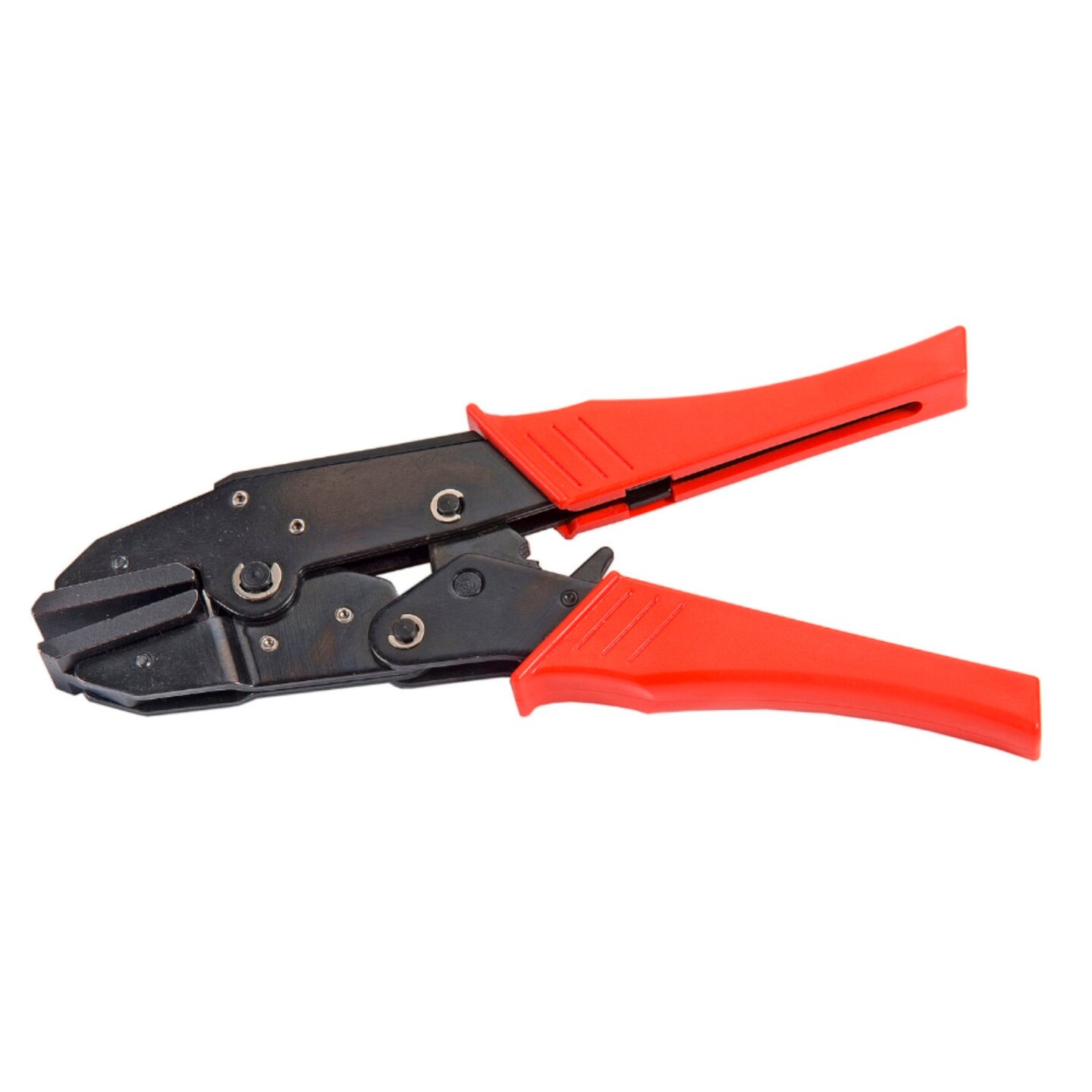 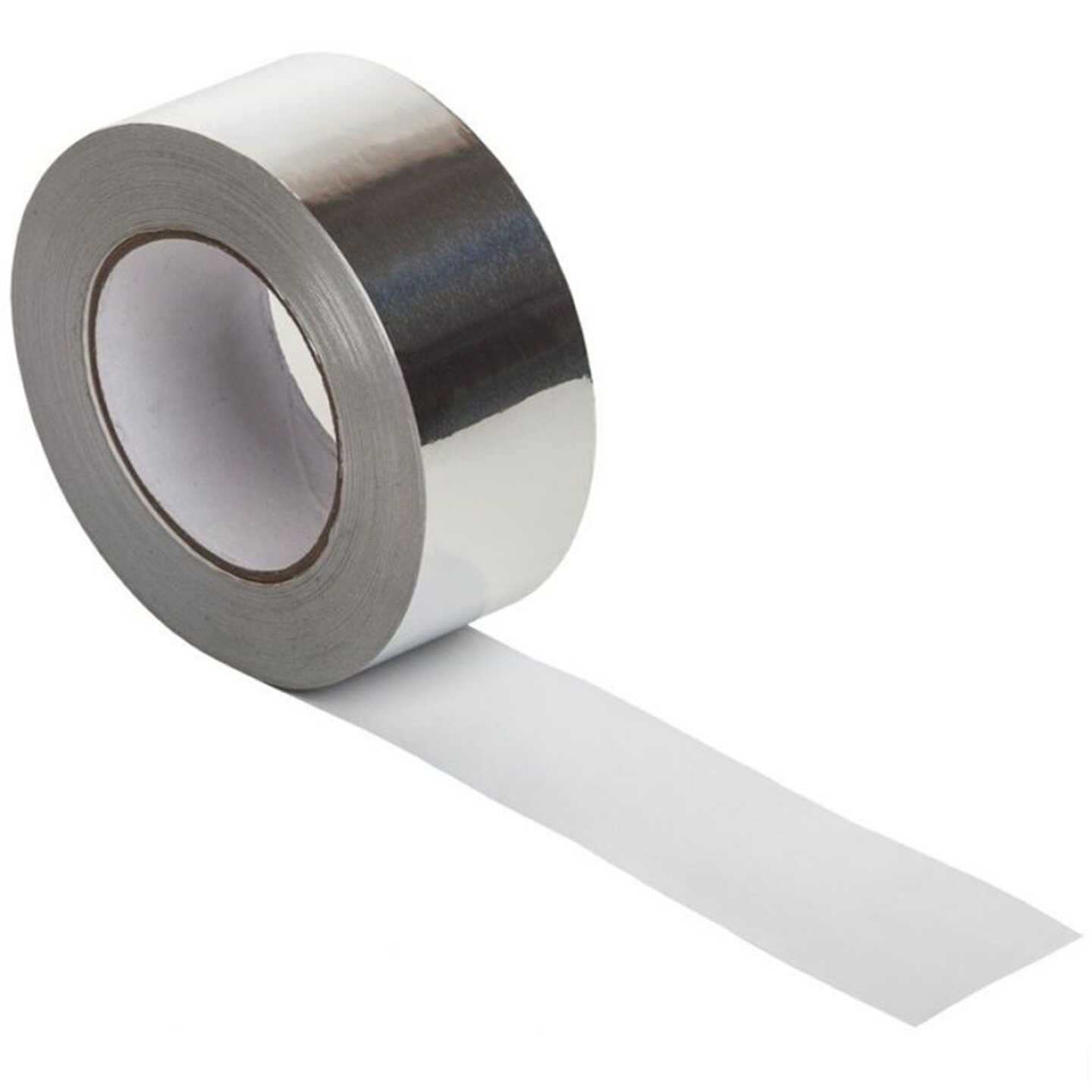 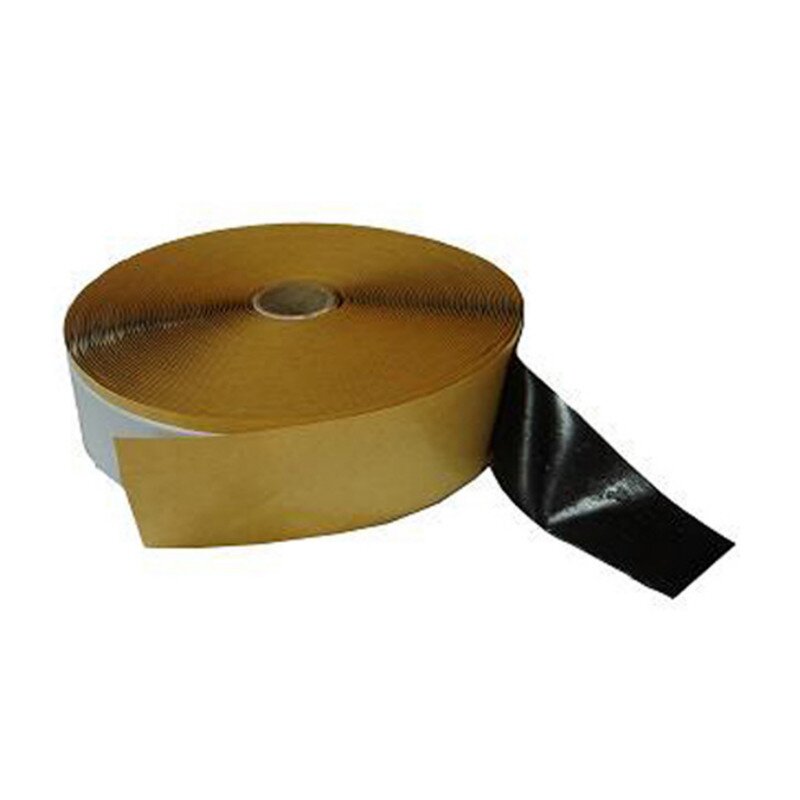 As explained in the article, the installation of electric underfloor heating in a caravan consists of several layers.

Finally, the actual floor covering is laid and forms the top layer in this structure. 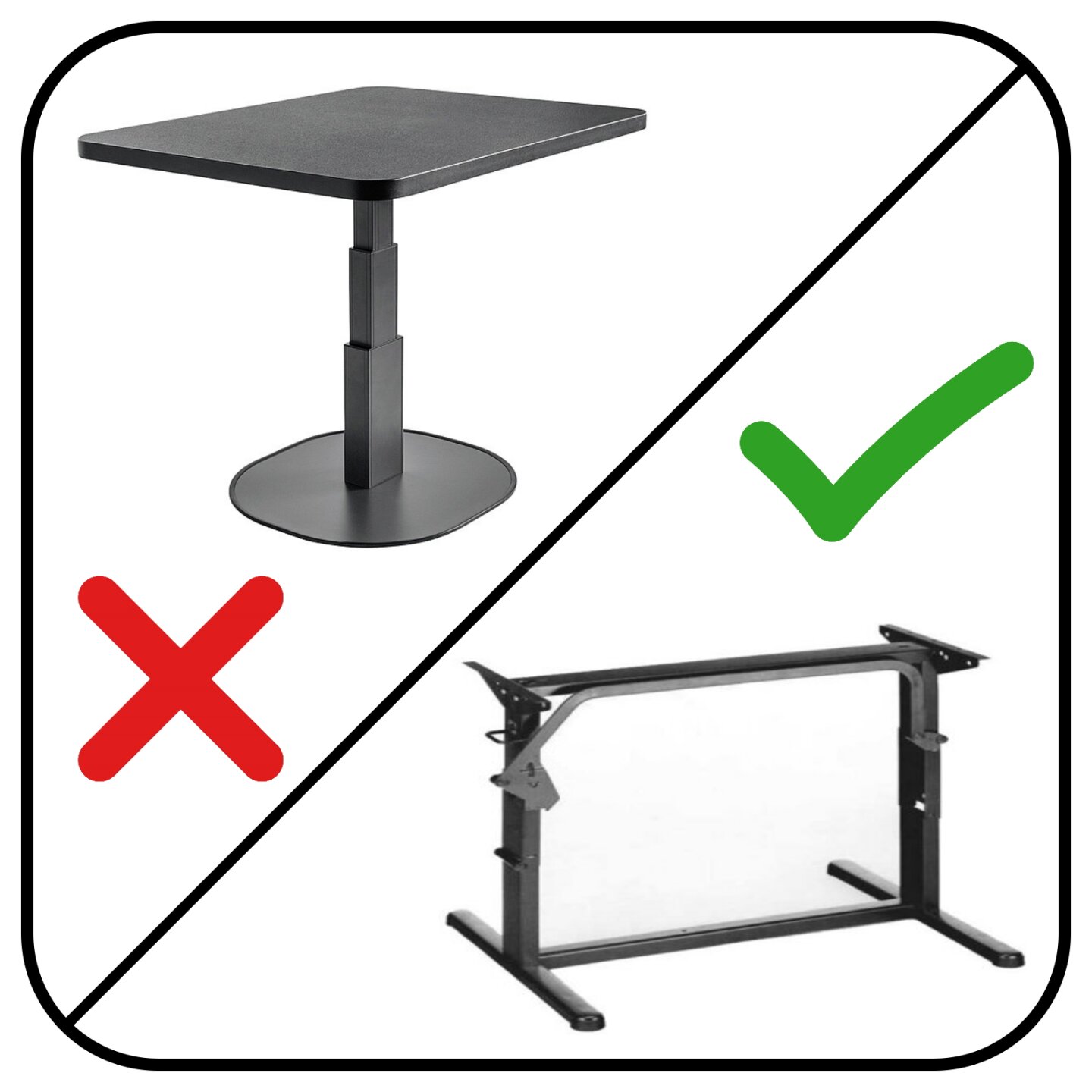 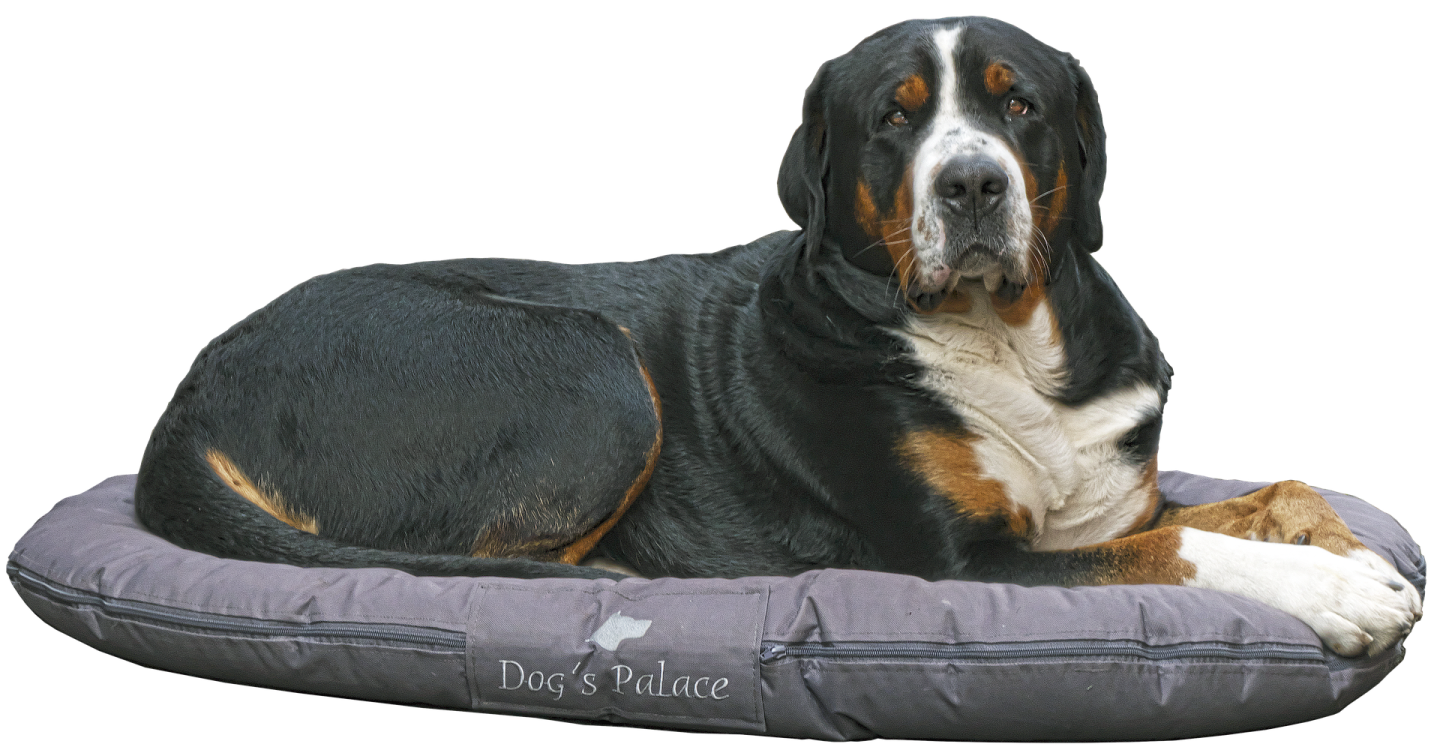 Is there anything else to consider?

A few small "obstacles" can still be hidden in a caravan, but they should be taken into account.

If you have any questions, please do not hesitate to contact us and we will work out the perfect solution for your project together with you.

* 230V heating foils must not be used in damp rooms!

Vinyl floors are very much in vogue! In Germany alone, more than 95 million square metres of the resilient and robust floor coverings were sold in 2020. And vinyl is also ideally suited for electric underfloor heating with carbon heating film. With us, you can find out how to plan correctly and what should be taken into account.

The gas savings plan stipulates that public buildings and offices may only be heated to a maximum of 19 degrees. But even with reduced room temperature, you don't have to freeze. Mobile office heaters are quick and easy to set up and can be plugged directly into a conventional socket.

Everyone probably knows that bees produce honey. But did you also know that the honey is "thawed" for processing? We often receive enquiries from beekeepers who are looking for a suitable heating system for a homemade thawing cabinet. You can find out what the so-called thawing cabinet is all about and what recommendations we can give for this DIY project in our blog.

For some years now, electric heating systems have been experiencing a renaissance and are increasingly being used as an alternative to gas and heating oil. The reasons for this are complex, because some fundamental factors have changed. In our blog, we explain which variants are available and what the differences are.

By selecting "Accept all", you give us permission to use the following services on our website: YouTube, ReCaptcha, Google Analytics 4, Google Ads Conversion Tracking. You can change the settings at any time (fingerprint icon in the bottom left corner). For further details, please see Individual configuration and our Privacy notice.

The settings you specify here are stored in the "local storage" of your device. The settings will be remembered for the next time you visit our online shop. You can change these settings at any time (fingerprint icon in the bottom left corner).

To submit forms on this page, you need to consent to the transfer of data and storage of third-party cookies by Google. With your consent, reCAPTCHA, a Google service to avoid spam messages via contact forms, will be embedded. This service allows us to provide our customers with a safe way to contact us via online forms. At the same time, the service prevents spam bots from compromising our services. After you gave your permission, you might be asked to answer a security prompt to send the form. If you do not consent, unfortunately you cannot use the form. Please contact us in a different way.

Would you like to see these contents? Activate the desired contents for one session only or allow the website to remember these settings. Once you have given your consent, the third-party data can be loaded. For this, third-party cookies might be stored on your device. You can change these settings at any time (fingerprint icon in the bottom left corner). For further details, please see the Privacy notice.

Too bad, now we have to go back to the glass ball or read in the coffee grounds to understand our visitors ...

Why do we have to do that? Quite simply, you have forbidden us to watch Your steps on our site with Google Analytics. That sounds dramatically to You, we know. But look at it: we do not even know who YOU are, we just see that SOMEONE looks at our pages, how he/she does that, how long this SOMEONE lingers on the respective pages, etc. We do not know who You are, whether You are male or female, how old You are, how Your weight is - no idea. Nor do we pass this data on to Google, we don not have them not at all! Nevertheless, this data of SOMEONE will provide us with valuable information about our site, we want You to like everything here, that You feel good and - of course - buy our products ...

So we can see where there are problems. If many visitors leave our site during the purchase process while choosing the payment method, we know that something is wrong and can improve it. Sounds good, right? Thats good for You and good for us. So it´s a win-win situation. So let us accompany You on Your way through our store. Deal?

Thanks, Harry can pack the glass ball ...

Great, you got it! Now we can work better on our offer again!